Be it hedge against flat market inflation or diversification of portfolio, Gold is a traditional asset that stood the test of time. It has been a go-to investment for many years, but with the arrival of New trends like bitcoin, the markets have shifted. With the similar performance and benefits, it might often lead to confusion when you decide to invest. So, here are a few things to keep in mind, to make an informed decision.

Firstly, the key information that is true in both cases is they are both lucrative options. But the conflict arrives when you cannot decide which one performs better while there is recession. So, you need to know a few terms and detail that helps you do so.

Gold has been a high-quality liquid asset for many years. It is a secure investment option and easy to start with. However, it is not easy to hoard. Although there have been revolutionary technology changes, gold is not something technology could tackle or a group of people could handle. The demand is higher than the supply and cannot be manufactured manually.

Gold is treated as an assurance for the financial future and usually is awarded to central banks, major governmental institutions, pension funds and astute family offices. It is a something that an individual can thrive on, when one is faced with difficulties or financial problems. Also, it is practically indestructible because all the gold that is mined is still in the circulation.

The key advantage is although the gold prices or subjected to volatility, the prices of the value would remain stable and never stoop too low while its alternatives keep varying. Additionally, when there is a price hike, the value of local currencies may decline but prices of gold increase since many of them try to invest in this asset. Hence, it does make an excellent addition to your portfolio.

Bitcoin is by far the highest valued cryptocurrency in the world. Unlike its co-related platforms, bitcoin can be accessible at any hour of the day and any day of the week. It is considered to be valuable since it is a limited asset as well. There can only be 21 million bitcoins in circulation at any point of time. It is similar to gold or any precious metal in terms of limited availability, and its value largely depends upon its demand along with the number of people investing.

Since it is relatively a newer introduction and needs time to get circulated in market, it is highly liable to volatility. Additionally, it is not under supervision of central bank or federal governments. It is a decentralized currency, that is monitored by individuals or group of people, and they take care of the transactions that happen on the bitcoin network. These people in turn get paid in Bitcoin for their effort and computing. Therefore, it is regarded as a risky and volatile asset since there are many speculations around it.

The Key Differences Between The Two Assets :

The basic difference is Gold is something that is sustained in the market from years ago, while bitcoin is rather a novel entry that has established itself successfully in the market with demand.

Gold has a fixed process for trade, measuring and tracking. It is highly impossible to steal it, match it with an alternative metal or destroy it. Similarly, bitcoin is hard to maltreat since it is decentralized and encrypted. However, its safety is not yet trust-worthy since some have faced the issues where they lost a huge sum of bitcoin due to the technical hardships. It cannot be authorized since bitcoin is protected with complex algorithms.

The value of both of these assets comes from its limited availability. To guarantee that every single Bitcoin is in usage until the year 2140, the compensation for mining is halved. Despite the obvious fact that there are only 21 million BTC, the world's gold still has yet to be extracted from the soil. Many firms also aim for asteroid mining for gold.

One of the major concern for the investors concerning bitcoin is its ever-changing value. Given its history, we can understand that the value of it has high fluctuations. Additionally, bitcoin has shown itself to be very unstable relative to the market as a whole. Notably during the digital currency surge, that propelled a variety of online currencies to all-time premium costs around the end of 2017, information from the crypto assets realm could trigger decision makers to take quick judgments, that send the price of bitcoin either up or down in a matter of seconds. Due to the reasons described above, gold does not have this intrinsic turbulence, making it a potentially stable asset.

Which one to invest in?

Bitcoin is really decentralized; its quantity is limited, and you may use it to trade with anybody in the world.

However, it is critical to evaluate gold's established qualities. Since gold is a more price-stable investment, you do not need to trade it unless your investing plan changes. Bitcoins, on the other contrary, may necessitate a unique investing strategy.

Given the unpredictable nature of Bitcoin, investors may wish to develop an entrance and exit plan if price swings become a danger. If the worth of Bitcoin increases to your benefit, investors must also determine when / if to sell at a profit.

If you're unsure whether to buy shares in gold or Bitcoin, Financial Advisors say that it all relies on your investing objectives. Given Bitcoin's lack of usefulness at the moment, the basis for it is uncertain.

Gold is a good investment for security and wealth conservation. Bitcoin is used for speculating. I believe it makes sense to purchase both, and for an extreme allocation, you could purchase 50% Bitcoin and 50% gold or major percentage of gold and minor share of bitcoins. 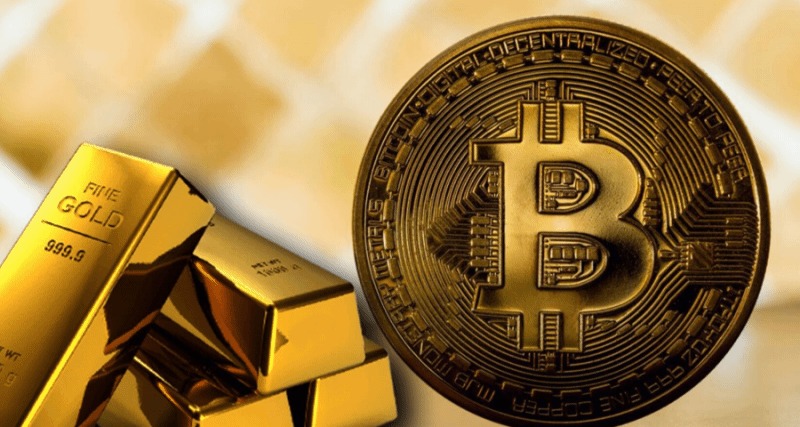