Gold is set to rally the coming months, two experts say. The key level they're watching

Gold is set to rally the coming months, two experts say. The key level they're watching

Gold’s hot streak is sll in its early innings, say the managers behind two of the largest ETFs on the market backed by the precious metal.

Bullion wrapped up its best week since May on Friday as investors bought it to hedge against rising inflaon figures, the latest being the more than 30-year record spike in consumer prices. It has climbed 7.5% since its recent boom in September and is now within 2% of breaking even on a year-to-date basis.

“Consumer demand led by gold jewelry mostly going into the emerging markets has done very, very well in the first three quarters of this year,” he said.

Jewelry accounts for 50% of global gold demand followed by central bank reserves at 25%, individuals at 15% and industrial uses at 10%, according to Shares.

The next six months tend to see the highest demand in India with fesval and wedding season underway, Milling-Stanley said. Addional catalysts from Chinese New Year and gi-giving season in the West could help propel the precious metal, he said.

“We should be running into what is typically the strongest period for gold demand in terms of jewelry in the year for the next five to six months and I think that’s part of the reason why gold is where it is today, comfortably above that $1,800 level, which it’s found very difficult to surmount during the summer and into the fall,” Milling-Stanley said. “But here we are, winterme. Gold’s doing very, very well.”

Granite Shares founder and CEO Will Rhind saw even more runway ahead. His firm is behind the Granite Shares Gold Trust (BAR), the fih-largest gold ETF on the market by assets under management, according to ETF Database.

“I'm very posive on the outlook for gold for next year and the reason is because of what's going on with the macro environment, parcularly inflaon,” Rhind said, also highlighng the $1,800 level.

“We obviously had the tapering announcement last week and those that expected the gold price to fall were surprised when it actually mounted a fairly significant rally and I think that's in a way due to, sll, the dovishness coming out of central banks” in the U.S. and U.K., he said.

Combine rate hike-resistant central banks with a supply chain crunch and inflaon that may not be as transitory as expected, and it could aract even more buyers, Rhind said.

“We have real inflaonary pressures that, the longer they persist, the more of a problem that causes and the more people will look for inflaon hedges,” he said.

“There just aren't that many places to hide and gold is one of those places that people have always gone to in mes of stress and I think this data's a reason for sll believing that gold is going to be there next year if there's an official acknowledgment that inflaon is a problem.”

* The dollar index hovered close to a 16-month high, pressuring bullion by increasing its cost to buyers holding other currencies.

* Minneapolis Federal Reserve Bank President Neel Kashkari said on Sunday he expects higher inflaon connuing over the next few months but warned that the U.S. central bank should not overreact to elevated inflaon as it is likely to be temporary.

* Gold has benefited from easy monetary policy introduced to spur economic growth during the COVID-19 pandemic, but any hike in interest rates should reduce the non-interest bearing's metal's appeal as it raises its opportunity cost.

* The Bank of England will be the first major central bank to raise interest rates but whether that inial increase comes as soon as next month or if it waits unl early next year has divided economists polled by Reuters.

* The number of Americans voluntarily quing their jobs rose to a record high in September while job openings stayed stubbornly above pre-pandemic levels, a sign that businesses may have to connue to raise wages in order to aract workers. 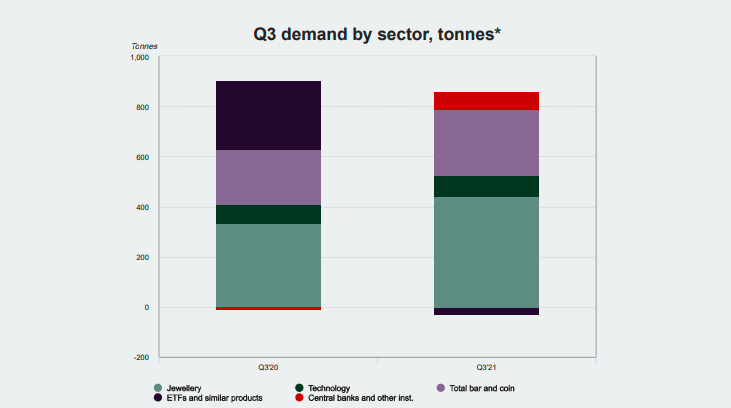