NEW DELHI: Risk of another wave of Covid pandemic, thanks to a mutaon detected in South Africa, increased the appeal of bullion counters on Friday as investors took a flight from risky assets.

Indian authories alerted all states about the new variant and asked them to rigorously screen and test travellers coming from or transing through three countries in which the variant had been confirmed — South Africa, Botswana, and Hong Kong. 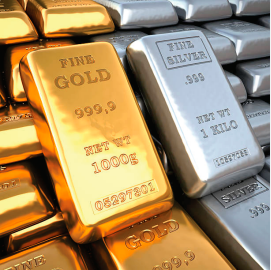 “Supporng prices are the drop in US bond yields and pause in the US dollar index. Rise in Chinese gold imports also shows robust demand. However, weighing on price is lack of investor interest and increased expectaons of Fed's monetary ghtening. Gold may trade higher as the market reacts to new virus related development, however, a sharp rise is unlikely with focus sll on Fed,” said Ravindra Rao, VP- Head Commodity Research at Kotak Securies.

In the spot market, the highest purity gold was sold at Rs 47,687 while silver was priced at Rs 63,308 on Thursday, according to the Indian Bullion and Jewellers Associaon.

The gold market's latest price drop could be a buying opportunity as the Federal Reserve is sll expected to be in no hurry to raise interest rates despite who is sing at the head of the table, according to one analyst.

In a report published Friday, Suki Cooper, precious metals analyst at Standard Chartered Bank, said that she sees higher prices for gold through the first quarter of 2022 as the market connues to focus on rising inflaon pressures and lower real bond yields.

"We believe that many of gold's headwinds have been priced in – from USD strength to the Fed tapering metable – and prices have held up well. While these headwinds could re-emerge, downside risks to growth, plus elevated inflaon and our expectaons for the USD to weaken and real yields to remain deeply negave, suggest price dips are likely to be viewed as good buying opportunies," Cooper said in the report.

Standard Chartered is looking for gold prices to average the first quarter around $1,875 an ounce, represenng a 3% gain from Monday's price. The gold market dropped sharply below crical support at $1,835 an ounce aer the White House announced that President Joe Biden will nominate Jerome Powell to remain as Chair of the Federal Reserve.

Gold prices dropped Monday as the U.S. dollar pushed to a new high for the year. December gold futures last traded at $1,816.60 an ounce, down nearly 2% on the day. While gold is reacng to U.S. dollar strength, Cooper said that correlaon is starng to break down. It might be beer to watch gold's relaonship with real yields, she added.

Cooper added that gold has been responding to the rising inflaon threat. She noted that markets will get another crical inflaon report later this week with the release of the Personal Consumpon Expenditures Index. She said that Standard Chartered expects PCE to rise 4.2% for the year, the highest reading since 1991.

"The gold market is concerned about elevated inflaon risk but also does not believe that central banks will react hawkishly to high inflaon prints immediately," she said.

Cooper also noted that aer dismal investor interest in gold, the market is starng to level out. “Flows are on track to mark the largest annual oulow since 2013," she said. "Net redempons have been a key drag on the market this year, and should they stabilise, gold prices are likely to gain upward momentum."