NEW DELHI: Gold prices dropped on Tuesday, nearing their weekly lows as the US Treasury yields spike ahead of an expected rate hike from Federal Reserve on Wednesday. Peace talks between Russia and Ukraine also dampened the bullion's appeal. Russian and Ukrainian delegaons held a fourth round of talks on Monday. 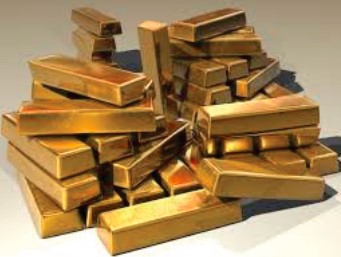 Gold is highly sensive to rising US interest rates, which increase the opportunity cost of holding non-yielding bullion. US Treasury yields jumped to a two-and-a-half-year high on Monday. PritamPatnaik, Head - Commodies, Axis Securies, said gold bulls connue to remain cauous ahead of the key Federal Reserve meeng where policy makers are set to raise interest rates

"Markets expect about seven quarter-point Fed rate hikes in 2022. The market will closely watch for the Fed's commentary. If it is not too hawkish, we could see the bulls back in acon," he added.

In the spot market, highest purity gold was sold at Rs 51,961 per 10 gram while silver was priced at Rs 68,414 per kg on Monday, according to the Indian Bullion and Jewellers Associaon.

The spot prices of gold have dropped about 1,650 per 10 gram since March 7, whereas silver has eased about Rs 2,500 per kg in the last five trading sessions.

"The high volality due to the Russia Ukraine war is governing the move and the underlying trend in gold is sll bullish. Investors may buy on dips ll the situaon stabilises," he adds.

"We expect gold prices to trade sideways to down for the day with COMEX Spot gold support at $1,920 and resistance at $1,970 per ounce. MCX Gold April support lies at Rs 51,800 and resistance at Rs 52,600 per 10 gram," said Tapan Patel, Senior Analyst (Commodies), HDFC Securies.

However, gold has gained about 1.4% so far in the week. Most markets will be closed on Friday for a holiday.

U.S. monthly producer prices increased by the most in more than 12 years in March amid strong demand for goods and services, the latest sign of persistently high inflaon that could compel the Federal Reserve to aggressively ghten monetary policy.

"Gold at this moment is trending and it's supported mainly by what we have heard from the Fed, the U.S. inflaon (data)," said Brian Lan, managing director at dealer GoldSilver Central.

Non-yielding bullion is considered a safe store of value during uncertain mes and a hedge against inflaon.

The U.S. dollar index eased off May 2020 highs following a dip in Treasury yields, making zero-yield gold more aracve for other currency holders.