Will stagflation lead to a turnaround in gold price this year?

Will stagflation lead to a turnaround in gold price this year?

Gold’s traditional role as a hedge against inflation has faltered all year, but growing risks that the global recovery could stall as price pressures rise may signal a turnaround for the precious metal.

Inflation had already been increasing on the back of unprecedented pandemic-era stimulus and as the rollout of vaccines spurred the gradual reopening of some countries. The surge in energy prices that’s accelerated over the past month on fears of shortages, on top of a broader rally in commodities, is now stoking concerns about sustained cost pressures.

Yet bullion is heading for the biggest annual decline since 2015.

Historically, gold has been viewed as an attractive investment when ination climbs, with the metal tripling through the late 1970s as U.S. consumer-price gains headed toward a peak of almost 15%. But bullion is also sensitive to interest rates, and investors are betting that central banks will soon start reining in stimulus and boost borrowing costs. That’s weakened the case for holding the precious metal. 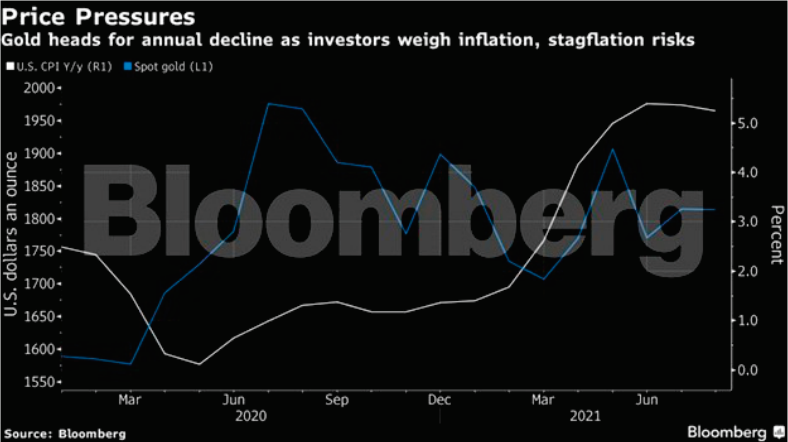 “Gold, short-term, is not a good hedge against ination -- against popular belief -- longer term it does better,” said Wayne Gordon, executive director of commodities and foreign exchange at UBS Global Wealth Management. “Hence, we don’t see it outperforming unless growth disappoints and there is a broader risk off, which leads to a reversal of monetary policy trends.”

This time though, investors are grappling with the possibility of stagation -- the combination of slowing growth and rising prices that hit major Western economies in the 1970s -- creeping back into markets with the recent surge in energy costs. Supply chain turmoil has also boosted the price of many goods for consumers.

“There’s certainly some decent gold upside if the narrative changes to one of persistent ination and slower growth,” said Nicky Shiels, group head of metals strategy at MKS (Switzerland) SA. “Stagation would force a macro rotation out of typical reation assets or commodities like oil and copper, and into the precious sector.”

European Central Bank Governing Council member Yannis Stournaras on Thursday pushed back on the idea of stagation. Earlier in the week, President Christine Lagarde said the bank will ensure that ination expectations are anchored at 2%, and warned “we should not overreact to supply shortages or rising energy prices, as our monetary policy cannot directly affect those phenomena.”

Federal Reserve Chair Jerome Powell and counterparts at the ECB, Bank of Japan and Bank of England have voiced cautious optimism that the supply-chain disruptions will be transitory. The U.S. central bank could start scaling back asset purchases in November, and ofcials have signaled a growing inclination to raise interest rates next year, which curbs the appeal of gold.

Ination, according to the Fed’s preferred measure, was 4.3% in the 12 months through August, well above the central bank’s 2% target. The consumer price index remains above 5% after surging in June by the most since 2008, although one factor behind outsized gains is the rebound from the depths of last year’s pandemic lockdowns.

Investors will be closely watching the U.S. jobs data for September on Friday. Prolonged high unemployment is another signier of stagation and has the potential to delay rate hikes given the Fed has stipulated maximum employment as one of the criteria for liftoff.

Bullion has lost about 15% since its record above $2,075 an ounce last year on a resurgent dollar and as rising bond yields damp the appeal of the non-interest bearing metal. Silver has also suffered losses, and is trading near the lowest level since July 2020. The drop in prices could be a buying opportunity for those who still believe in gold’s role as an ination hedge.

“It’s not a question of whether ination will have a severe impact, but a question of when,” said Gnanasekar Thiagarajan, director at Commtrendz Risk Management Services. “So investing in gold and silver is the most ideal thing because gold is an inationary hedge and silver tends to appreciate much more when gold starts rallying."