NEW DELHI: Gold prices bucked the weak global trend to rise marginally in early trade on Friday but the upside remained capped amid firm US Treasury yields and a stronger dollar. The yellow metal, meanwhile, was headed for its first weekly losses in three.

Ravindra Rao, CMT, EPAT, VP- Head Commodity Research, Kotak Securies said that gold is trading in a narrow range as support from renewed weakness in equies, growth worries, inflaon concerns and geopolical tensions is countered by the monetary ghtening stance of the Fed and other central banks. 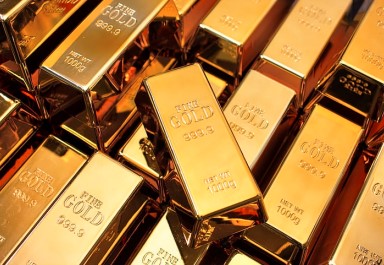 "ETF oulows also show profit taking by investors. Gold has stabilized aer recent losses and mixed factors may keep the price in a range, however, the prospect of Fed's ghtening may keep pressure on price," he added.

In the spot market, the highest purity gold was sold at Rs 52,540 per 10 grams while silver was priced at Rs 67,330 per kg on Thursday, according to the Indian Bullion and Jewellers Associaon.

The spot prices of gold have dropped almost Rs 1,110 per 10 grams in the last four sessions, whereas Silver has tumbled about Rs 2,800 per kg in the same period of review.

Ravi Singh, Vice President and Head of Research, ShareIndia said that gold may remain rangebound as safe-haven demand stemming from the Ukraine crisis and its potenal impact on the global economy will get countered by a stronger dollar and a rise in yields.

Echoing similar views, PritamPatnaik, Head - Commodies, Axis Securies said that in the short term it's difficult to chart a bullish strategy for gold. It's expected to trade in a ght range, he said.

Gold prices eased on Thursday as a rebound in U.S. Treasury yields tempered bullion's safehaven demand stemming from the Ukraine crisis and its potenal impact on the global economy.

U.S. bond yields have marched higher on expectaons that the Federal Reserve will aggressively hike interest rates as inflaon accelerates at its fastest pace in 40 years.

"As the crical level of $2,000 wasn't broken, people have probably decided to take profits... and move funds out to equies or even short-term treasury bills," said Brian Lan, managing director at dealer GoldSilver Central.

Lan said gold would look to consolidate in the near-term and is currently doing so at around $1,940-$1,960 per ounce. Earlier this week, gold came within striking distance of the key $2,000 level as concerns around the Russia-Ukraine conflict and rising inflaonary pressures increased safe-haven bids.

"Geopolical risk and inflaon pressure are currently the two primary drivers for the gold market. An aggressive Fed rate hike of 75 bps could be a short-term price damper, while elevated inflaon due to supply shocks could migate the negave impact," ANZ research said in a note.

Spot gold may test a resistance at $1,961 per ounce, a break above which could lead to a gain to $1,975, according to Reuters technical analyst Wang Tao.