NEW DELHI: Gold prices were trading lower on Friday but were set for second weekly gain as talks between Russia and Ukraine made lile apparent progress. The safe-haven metal pulled back about 3 per cent in the previous session, its worst daily decline since January 2021 - snapping a rally that took it near the August 2020 all-me highs. Gold futures on MCX were trading lower by 0.45 per cent or Rs 239 at Rs 53,000 per 10 gram. Silver futures were trading down by 0.41 per cent or Rs 291 at Rs 70,180 per kg. Gold is highly sensive to rising US interest rates, which increases the opportunity cost of holding non-yielding bullion. The US Federal Reserve is scheduled to announce its next policy statement on March 16. 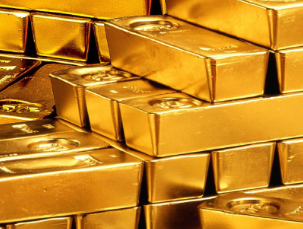 In the spot market, highest purity gold was sold at Rs 52,880 per 10 gram while silver was priced at Rs 69,815 per kg on Tuesday, according to the Indian Bullion and Jewellers Associaon.

Spot prices of gold have jumped more than 1,100 per 10 grams in the last couple of sessions month , whereas Silver has tumbled almost similar per kg in the last two trading sessions.

Ravi Singh, Vice President and Head of Research, ShareIndia, said, "Gold prices are expected to outperform even aer the current war tension seles as due to the aer-effects of war."

March 11: Gold prices were set for a second weekly gain as talks between Russia and Ukraine made lile apparent progress, although bullion saw a dip on Friday as elevated U.S. Treasury yields on the back of inflaon data assuaged its safe-haven appeal.

* There was no breakthrough in the first high-level talks between foreign ministers from Russia and Ukraine, who met in Turkey on Thursday since Moscow invaded its neighbour.

* Investors took stock of the U.S. inflaon data, which was in line with expectaons but also showed the biggest year-on-year increase since January 1982.

* The European Central Bank took a hawkish turn on Thursday saying it would end its asset purchases this summer, paving the way for a rate hike later in the year.

* The U.S. Federal Reserve is scheduled to announce its next policy statement on March 16.

* Palladium , used by automakers in catalyc converters to curb emissions, was down 0.5% at $2,914.78 per ounce. The metal hit a record high of $3,440.76 on Monday, driven by fears of supply disrupons from top producer Russia.